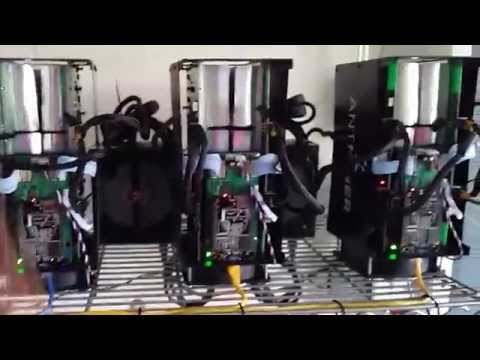 Can we bring the mining back?

I have been missing the old mining days lately. Everyone, including myself, has moved away from doge mining directly due to unprofitability after AuxPow. What if we had a multipool Doge site that paid out in doge. I know this has been attempted before but I would love to connect my miners to something that auto traded for doge and delivered them to my wallet. Could this bring some Wow back?
Current daily payouts:
Antminer S3 : .0053 bitcoin or 8,153 doge
gridseed blade: .1234 litecoin or 1,542 doge
Antminer S5: .014 bitcoin or 21,538 doge
NOte: I know Pandapool has some functionality but I have had issue connecting, it is limited to scrypt and not a Shibe oriented site.

Using an Antminer without a router?

Hey all, I'm thinking of getting an Antminer (S3 or S5) - a bit late to the bitcoin game, but all the guides I've seen for setting up the Antminer involve connecting it to a router. Is it possible to just connect it straight to a PC with an ethernet cable? (My networking knowledge is poor, sorry!)
As for a PSU, I assume any PSU with sufficient wattage would be fine?

Hi, i just started mining bitcoins (for fun and to see how everything works). So i bough 2 used Antminer S5 for 100$ on ebay. I changed the fans to some cougar 1600 rpm PWM fans; they are slower but i underclock at 250 so the unit don't even hit 55c so i don't really need the big fan. The only problem is about 4 minutes after the units start, they start beeping. They do have a connection and in the miner status says that the units are alive and hashing and it also says the rpm which they say is 1650 rpm. In the kernel log it says error fan 1. But the units are still well ventilated and hashing so what can i do to make it work with the fans i got? These are the fans i installed on them: http://www.newegg.ca/Product/Product.aspx?Item=N82E16835553006&_ga=1.17870202.23255324.1469714413